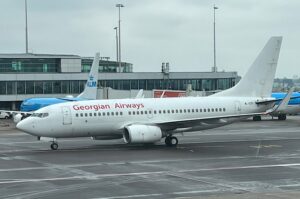 Nothing beats visiting a country and flying there with a local airline. The experience with Georgian Airways however was nothing special at all.

I was looking for options of a dayflight to Georgia as the preference was to arrive anything else but around midnight. One of the few available connections was with Georgian Airways. The airline operates a small fleet of Boeing 737-700/800 and a CanadairJet. Booking directly with the airline was quite pricy out of their European gateways. As we flew out of Zurich we found an affordable codeshare connection with KLM. So few booked and flew from Zurich via Amsterdam to Tbilisi.

We checked in in Zurich and got our boarding pass for the Amsteram to Tiblisi sector as well. We had a transit time of below 90 minutes. This was rather tight as Amsterdam had issues with traffic and working force. The situation worsened when the Zurich to Amsterdam flight with KLM was delayed more than 1 hour due to air traffic control in Amsterdam.

Quite smooth as there was no security clearance needed due to intra Schengen flight. However, there was a rather long queue at immigration. Online we saw that the inbound flight from Georgian Airways was also delayed, so lucky enough we weren’t in a rush.

The bording process was smooth and straight forward. The flight was quite full but not fully booked. The leather seats had an average seat pitch, luckily we had three seats for us.

Inflight service for a 4h15min flight was inferior considering that the prices of the direct flights are rather high. Service consisted of a cup of water only. No meals, no snacks, no nothing. Quite disappointing. The crew was neither friendly nor rude. The hot water bottle for our toddler was filled inflight.

We travelled with a baby. Even though sitting in the very front of the plane it took so long until our stroller was offloaded. Every other passenger already cleared immigration by the time we got there. The terminal it self looked modern and nice but nothing luxurious.

Decent timing of the flight made it a feasible choice for us. Since we had to change the planes anyways I would certainly opt for another flight option next time. Georgian Airways is nothing to avoid but I would certainly not pay more for this flight the next time.

I have also realised that in some countries Klook is the best option to book services such as rental cars, SIM cards and much more.